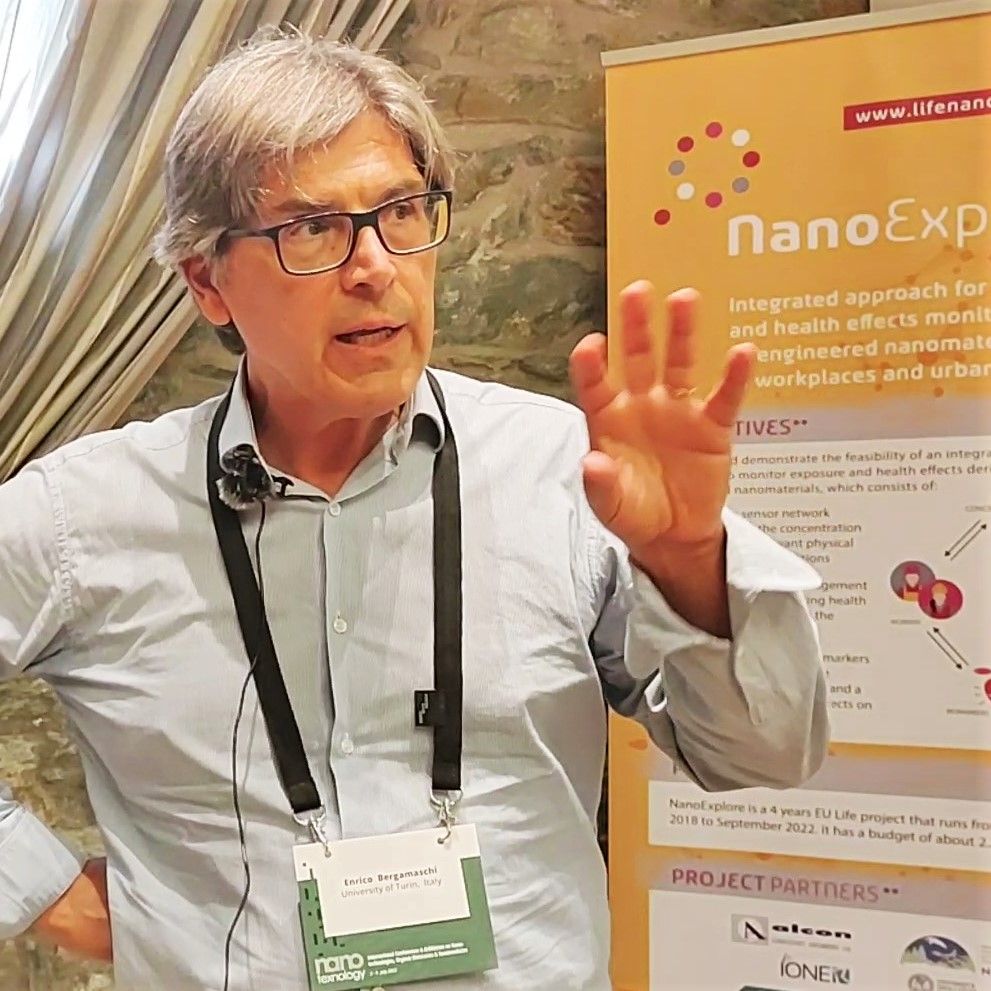 At NanoTexnology 2022 in Greece, Thessaloniki, Cathrin Cailliau from Yordas interviewed all present NanoExplore partners on their views on the ending project. These interviews are now being published as a series to show the different perspectives of the project members, what has been done in the project and its results.

My name is Enrico Bergamaschi, I’m professor of occupational health at the Faculty of Medicine University of Torino. My main role in the project was to coordinate the UNITO research unit, a multidisciplinary team consisting of occupational physicians, PhD students, biochemists and technicians. We were in charge of first carrying out a critical evaluation of current data on biological effects and existing biomarkers of nanomaterial exposure and selecting a panel of already valid biomarkers of exposure and early effects. Then, we set up tools and methods that we formally recorded in a harmonised protocol, together with Unisanté. We engaged companies and coordinated the field studies in Italian factories to apply the research protocol, analyse the biological matrices for the quantification of biomarkers and fill in the database. It was actually a collaborative effort, as well as a hard exercise.

Why is the NanoExplore project relevant?

I think that the NanoExplore project is relevant in terms of scientific and societal benefits because it allowed us to produce a model for assessing both exposure and possible health effects at the same time. The standardised methodology can be applied in a broad range of scenarios from the exposure to engineered nanomaterials and ultrafine particles, especially in workplaces, but also in different environmental settings.

What did you find most interesting about the project?

From my side, the interest is on the possibility, to use, to establish and validate a set of biomarkers reflecting a variety of changes in certain biological systems which are known as targets for nanomaterials. This enables us to show possible relationships between exposure to a given class of nanomaterials or a group of nanomaterials, or even to overcome drawbacks when we assess exposure to a mixture of nanomaterials and possible health effects. In my opinion, this is a very important achievement of the project and also an opportunity.

What is the most important result of NanoExplore in your eyes?

Ah, the answer is quite similar. (laughs) I think the most important result is to have established, after many years of lacking scenarios, a potential international cohort of workers and to be able to follow up these workers. We should be able  to better understand whether the changes we found in this population of workers  are simple physiological changes or are forerunner of possible health effects.

How can the results of NanoExplore be used to benefit society?

Enrico Bergamaschi on nanoparticle monitoring in the workplace and elsewhere....